We invite you to enter The Readitation Field For 30min… Any day, Anytime, Anyplace

SELECT your spiritual reading material.
CHOOSE a comfortable spot to sit
POST on “Readitation Facebook Page”
or TEXT in the “What’s App Text Chat”
that you are STARTING MEDITATIVE READING
SHARE, when finished, A QUOTE or INSIGHT.

JOIN a GROUP that
FORTIFIES and DEEPENS
your INTENTION 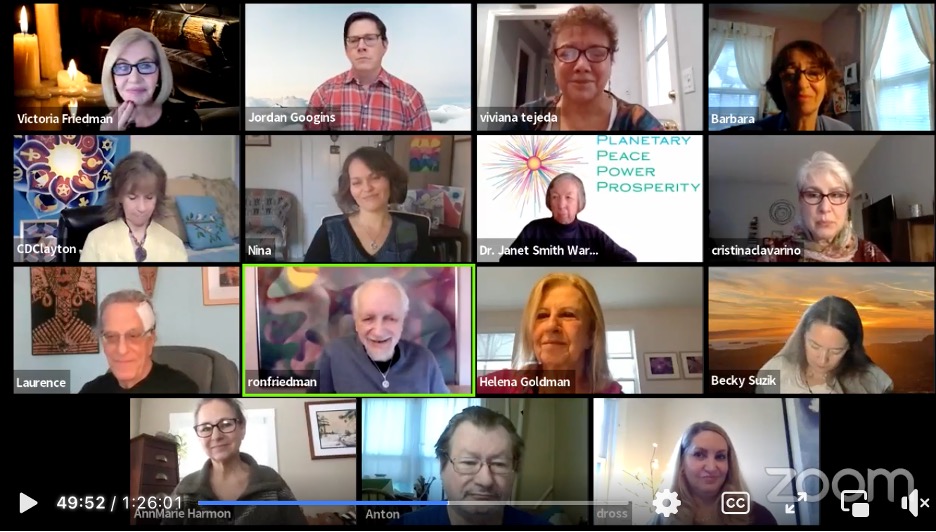 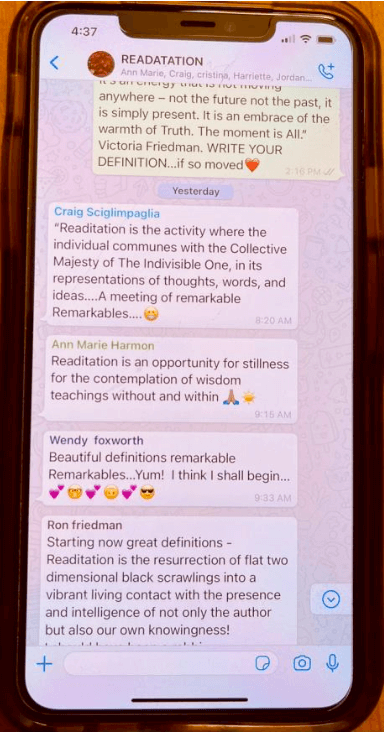 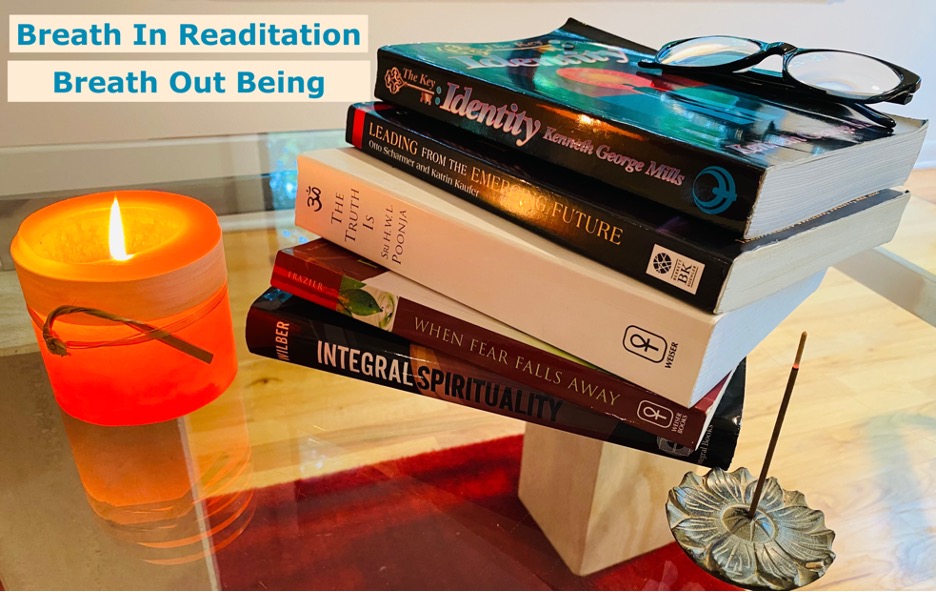 Harry Benjamin: Basic Self Knowledge
P.D. Ouspensky: In Search of the Miraculous
Maurice Nicoll: Psychological Commentaries on the Teaching of Gurdjieff and Ouspensky
Rudolf Steiner: Knowledge of Higher Worlds and its Attainment
James Allen: As a Man Thinketh
Kenneth George Mills: The Key: Identity
Paul Brunton: The Secret Path
Gangaji: The Diamond in your Pocket
Sri W.H.L. Poonja: Truth Is
Sri Nisargadatta Maharaj: I Am That
Rupert Spira: The Nature of Consciousness

NON-DUALITY
Eckhart Tolle: The Power of Now.
Ramana Maharshi: The Yoga of Self Inquiry
Sri W.H.L. Poonja; You Are That
Mooji: Vaster Than sky; Greater Than Space
Adyashanti: The Direct Way
A.H. Almaas: Spacecruiser Inquiry; The Facets of Unity
Rupert Spira: The Art of Peace and Happiness
Tony Parsons: The Open Secret
Byron Katie: Loving What I: Four Questions That Can Change Your Life
Jeff Foster: The Deepest Acceptance
Jan Frazier: When Fear Falls Away
Unmani Liza Hyde: Die to Love
Dorothy Hunt: Ending the Search
Pema Choldren: The Places that Scare You
Katie Davis: Awake Joy
Colin Drake: Awareness of Awareness
Francis Lucille: The Art of Not Expecting
Jac O’Keeffe: Born to be Free
James Swartz: How to Attain Enlightenment
Gina Lake: Radiance: Experiencing Divine

Readitation is simply a song to the absolute, a hymn of praise, an outpouring of love. Mind, begins to take on the qualities of this open, empty, transparent presence.

“Readitation is an opportunity for Stillness, for the contemplation of wisdom teachings without and within.” – Ann Marie Harmon
BENEFITS
Readatation develops will power in our thinking and upgrades the intellect with transcendent spiritual principles.

However, truly, the Readatation has little to do with knowledge. Through contemplation, meditation and/or silence the ideas infiltrate our being and do their work. The content is always what we need to hear, to understand and to see a new perspective.

Ideas have force and Readatation imbues us with a palpable energy for dealing with daily situations inner and outer.

Readatation is an opening to the energy of Grace that is beyond the mind’s comprehension.

Readatation brings with it a heightened ability to observe our mind, emotions and body and become aware of all the ways that we are distracted from clarity.

The Reading Practice started in an intensive 12-year program of Self Knowledge primarily based on the Teachings of George Gurdjieff and included Rudolf Steiner, the 12 Steps of AA. The practice was called a “Reading Aim” and it was the foundational spiritual practice in the program. All participants in the program read 2 hours straight everyday first thing in the morning, after getting dressed, washing up and before breakfast.

We had Reading Aim partners, as it was obvious that most of us did not have the will to do this on our own. The partnership consisted in calling each other at start and at finish of the Aim.

When I entered the program, everyone was reading basically one book and we continued reading that book for 5 years!! It was a short book based on “The Work” of Gurdjieff and Krishnamurti. After that we were exposed to many authors.

At this point you might be asking yourself, “Why would anyone agree to such an exercise?”

The people who were attracted to the program had two basic similarities. One was that our inner and outer lives were falling apart. The second was that we all had a great desire for spiritual teachings and transcendence.

To engage in the program the first requirement was the two hour Reading Aim which was a pre-requisite to the rest of the program.

For me, from the beginning, the results were amazing! The years of clinical depression that I had been diagnosed with by a reputable MD psychiatrist vanished in about a week, never to return.

Many who came to the program and started reading had similar experiences including freedom from drug addiction, alcohol, smoking, migraine headaches and mental/emotional symptoms. They not only got healthier and stable but experienced spiritual awakenings and eventually became spiritual teachers.

With Gratitude, Victoria and Ron